Workers ! We can't ever afford to stop our  resistance against capital and its lackeys.
Let us keep up and continue with our struggle!

A short video glimpse of the procession 1

A not very large but very-very strong procession (more than half km long and fully compact procession) of hundreds of male and female workers amidst the most ever busy schedule of Deepawali (it was Dhanteras on 21st Oct) took all by surprise. The local workers and employees were also positively surprised and happy that at least IFTU  came forward to take the cudgel against this highly anti-worker and anti-employee clique at the top of the ECL management. Although the local people of Sanctoria were busy cleaning their homes and preparing for Dhanteras buying, they came out of their houses and themselves came foreward to take hand bill/ leaflets and extended support. The comparitively narrow road was jammed. 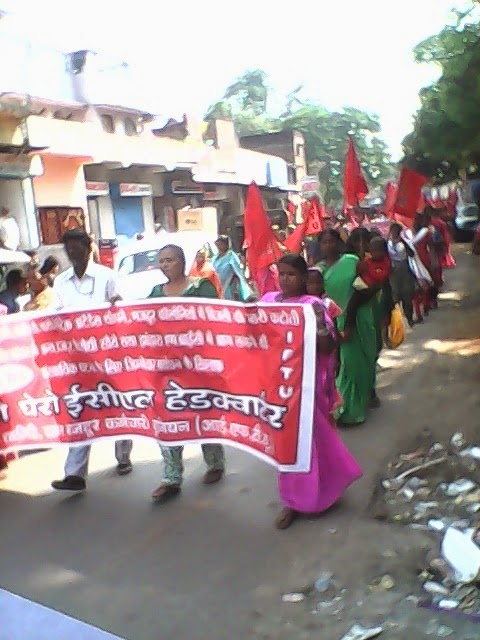 0.4 km long procession is coming out of Sanctroia Stadium

Workers' procession, when it reached ECL headquarter, had already entered the first entry gate before the ECL administration and local state administration could do anything. Hence, the gate was virtually under the control of the workers. The ECL management hurried to close the last gate and we allowed it as we ourselves had decided not to enter the internal premises of ECL. So we decided to keep the main gate captured. Hard slogan shouting was going on always, in the meantime. ECL and local state administration were both requesting and arguing with us not to get provoked by the ECL top management's attitude i.e if the CMD doesn't meet us, as the CMD and DP both were reportedly not present at the headquarter at that time. We, too, were late by more than an hour. On this pretext, as also on the pretext that no formal notice of your our program reached the Personnel department, they kept us requesting us not to mount tension if CMD and DP aren't available. The administration itself took the responsibility of assuaging the workers and arranging the meeting of our delegates with the other top officer of ECL management. 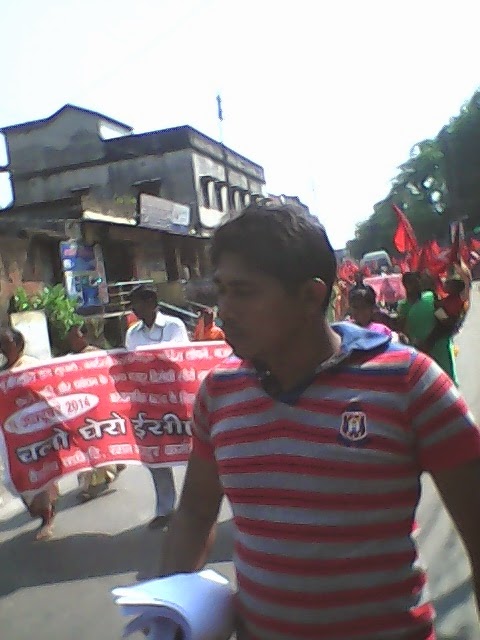 Procession is about to reach the ECL Headquarter

Lastly, a meeting was arranged with a senior officer of ECL on behalf of CMD and DP with the assurance that the top most ECL management will take proper action on our "charter of demands" which was duly accepted and received with signature. In the meantime, they were constantly requesting us not to disturb and obstruct the main gate as the general employees will have to leave and rush for home quickly for puja kharidari etc.and also for other puja preparations. After the meeting with the senior officer ended and seeing that there is no use keeping the gate disturbed and also keeping in mind the difficulties being faced by the general employees, we cleared a part of the gate and road through which the general employees got out of the campus. 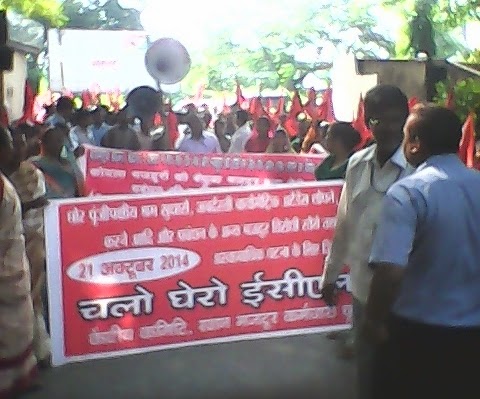 Workers surrounding gate of the ECL Headquarter
com. Kanai talking with the security officer of ECL

A long Speech of one of the main leaders com. Ajay (member of the central committee of KMKU) took place after that, explaining what happened in the talk and calling upon the workers and employees, including the ECL headquarter employees, to unite and resist the onslaught being launched on the workers and employees of the ECL in particular and those of the whole country in general in the form of new labor reforms and other dictatorial steps of the management at different level. He explained in detail why the workers and employees must resist biometric attendance system, what is the main motive of the Govt. and management behind all these and how it is being resisted and rejected in Europe and America. He also explained in short how it invades the privacy of an individual and how it is grievously dangerous as biometric data can be stolen and misused by any miscreants and even by the management.

A short video glimpse of the procession 2

He also explained why we all must unite and come forward to resist the New labor reforms which will take heavy toll on workers freedom and right to form unions and other facilities that they have been enjoying till now. The new labor reforms are purely meant to help the capitalist class in general and the big corporate houses in particular. He also dealt in short how the central government acted in favor of private capitalists and corporates in handing over a sizable part of 214 coal blocks (earlier whose arbitrary auction to the capitalists was made null and void by the supreme court) through e-auction and by giving permission for commercial mining of a part of these coal blocks. He also said that time is not far off when the Coal India will itself be privatized and given to private corporate houses of India and abroad. But before finally doing this, the central govt. is trying to trample every right of workers to protest and organize under its feet. 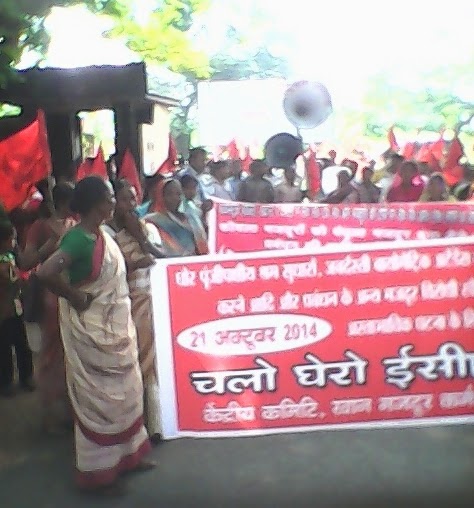 He also demanded a high level inquiry in the sudden fire break-out in MIC, Jhanjra. He said it simply smacks of top level conspiracy as the fire broke out in four month itself where as incubation period before R-VI coal of jhanjra MIC can catch fire due to spontaneous heating only after 9 months. He demanded to bring the culprits to book and duly punished as such for the heavy toll on public exchequer by way of destroying a huge public property that Jhanjra MIC is. 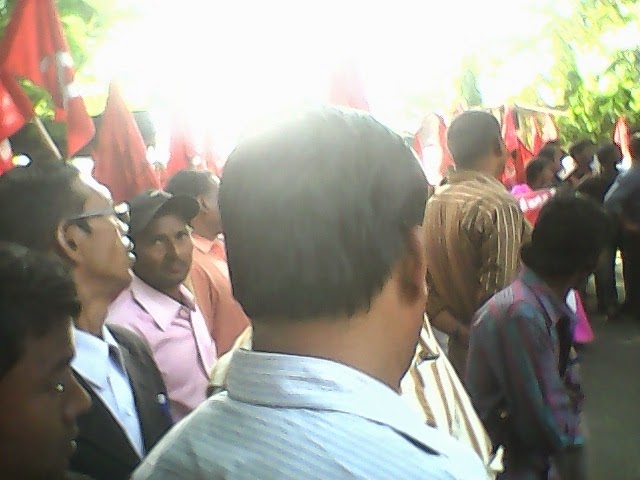 He also castigated the management for heavy and rampant power cut being unleashed in workers colony, though workers pay for it from their basic pay. He demanded that 24 hour uninterrupted supply of 220 volt be supplied regularly. He also explained how the ECL management acts foolishly and with cruel apathy towards workers when it orders to stop free coal for fuel to them in the name of LPG being provided whereas the quarters are in such a mesh that LPG can not be used at all. 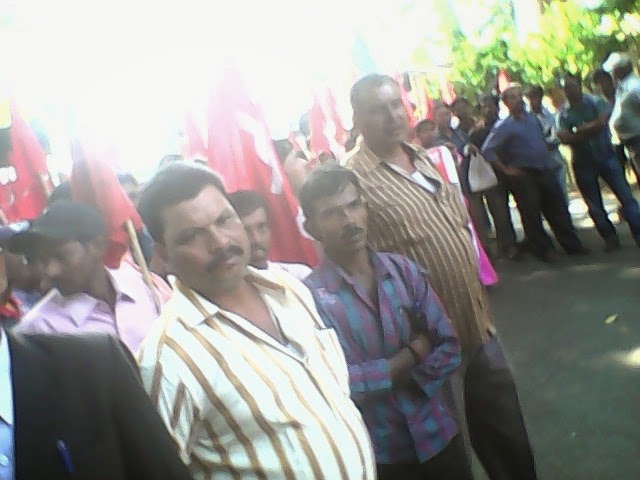 After this, gherao was postponed for further date... .
Posted by New sarvahara vimarsh at 10:34 PM No comments: